It could be anything from passing off cheap fish as a more expensive type to diluting items. And pay attention because some of the sneaky substitutions could make you seriously sick. Here are 14 things you’re eating that are probably fake: 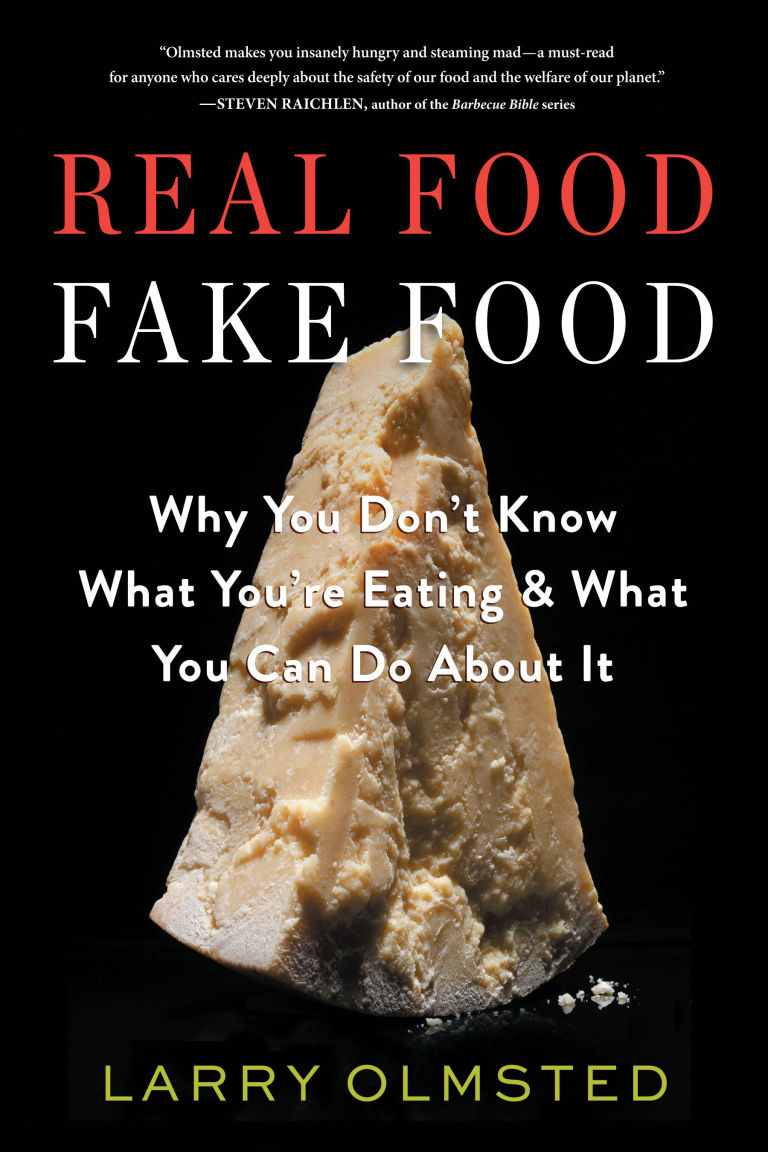 Most bottles of EVOO are fakes, writes Olmsted. And this is a big problem because they’re often stripped of the good stuff and replaced with dangerous substitutions.

“This is one of the most pervasive Fake Foods in America, reaching deep into home kitchens, restaurants, and supermarkets, and not unfamiliar to the government agencies supposedly watching over our food supply,” he writes.

Instead of using the pure stuff, loaded with healthy fats, they’re often diluted with cheaper oils like peanut and soybean—which is super problematic because both can cause severe allergic reactions.

That white tuna roll you love? Yeah, probably no tuna in there at all. Olmsted points to a study done by nonprofit marine conservation group Oceana, which took samples from New York sushi restaurants and found that 100 percent of them served fake fish.

“Consumers ordering white tuna get a completely different animal, no kind of tuna at all, 94 percent of the time,” he writes. “Your odds of getting served real white tuna in a restaurant are about the same as hitting zero/double zero on a Vegas roulette wheel, which is to say, not good.”Instead of tuna, you’re likely eating escolar, which is nicknamed, disturbingly, “Ex-Lax fish,” because it’s known for giving people diarrhea for days.

Real Parmesan cheese is a pricy delicacy from Parma, Italy. So what is most of the stuff we see labeled as such here? Olmsted cites a 2016 FDA study that found that products marked in the US as “100 precent Parmesan” are often cut with cheaper cheese or even wood pulp. He suggests looking for a “Made in Italy” stamp if you’re looking for the real deal.

There are no standards right now determining what does and doesn’t actually qualify as “honey.” Weird, right? So places can sell honey diluted with cheap sweeteners, like high-fructose corn syrup, or illegal antibiotics and get no penalty for deceiving us.

Ok, this one hits very close to home. Olmsted writes that ground coffee is often cut with cheaper substances.

It’s safer to just suck it up and buy a coffee grinder so you can get the beans instead.

Yep, tea’s not safe either. Olmsted points to the Congressional Research Service, which filed a report to Congress in 2014 that found that manufacturers added sawdust and leaves from other plants to make some teas last longer.

This is one category where you have to read the label—every single time. Manufacturers aren’t required to list the percentage of each ingredient on the packaging, and apple juice is much cheaper than juices like pomegranate or blueberry. So places will sometimes dilute their juices with loads of apple. And if you’re thinking, “Well, cool, I like apple juice anyway, I’ll just buy that,” nope.

“Even if the apple juice you buy happens to be real apple juice, you still may not want to drink it,” he writes. “The vast majority of apple juice sold in the United States is from Chinese-made concentrate, which as I have mentioned has repeatedly been found to contain banned pesticides and other chemicals.”

Olmstead says it’s safest to avoid buying Red Snapper altogether. He says the expensive fish is pretty much always faked in the U.S., with places trying to pass off cheaper fish in its place. And this could be particularly dangerous for pregnant women and kids.

“It has many different imitators, including mercury-rich tilefish, which is on the FDA’s do-not-eat list for sensitive groups such as children and pregnant women,” he writes.

If you’ve ever treated yourself to these pricey sliders or steaks, you were probably duped. The import of Japanese beef was banned for a long time—and though it’s been lifted, only eight restaurants in the U.S. carry it now, Olmsted tells Town and Country. So odds are very high that you ate a fake.

Bad news for truffle fries lovers. You’ve actually been eating chemicals engineered to taste like truffles. Real truffle oil is just too expensive to make sense for most restaurants.

“Almost no truffle oil is real,” he writes. “Most chefs are fully aware that what they are selling is not a valuable fungi harvested by pigs in Alba but rather a cheap chemical cocktail from a laboratory. The truth about truffle oil, while kept from consumers, is well known in the restaurant business.”

Most Americans have heard that it’s illegal to call sparkling wines that aren’t from the Champagne region of France Champagne. Not quite, says Olmsted.

“By some estimates, more than half of the wine labeled ‘Champagne’ sold in this country is not the real deal, and there are many producers, from Long Island to the Finger Lakes to California, with the biggest being Cook’s, André, Great Western, and Korbel,” he writes.

And, contrary to what you might have thought, stores selling those brands don’t mention where those fakers are made.

Real grouper caught off of Florida’s west coast is absolutely delicious. But Olmstead writes about the St. Petersburg Times’ big expose that found that stores often tried to pass off other cheaper fish as Grouper—like Asian catfish, tilapia, hake and “one creepy fish that according to DNA testing belonged to an unknown species and could not even be identified.” Yikes!

If you’re getting lobster from some chains like Red Lobster and Long John Silver’s, Olmsted writes that there’s a chance you’re actually eating “langostino,” which refers to some species of shrimp and crab—but not lobster.